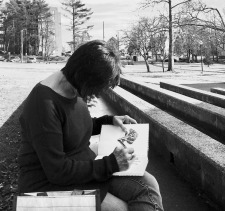 Hello, my name is Lulu deCarron, and this is my website

Lulu is an entrepreneur who owned and operated two successful businesses. The first was an upscale bakery and catering business, the second, a Coffeehouse named Lulu for 24 years in New Haven. It sat on the rim of Yale's campus, affectionately called "The Yale Grad School Ghetto" or the beautiful "East Rock Neighborhood." It was known by articles and interviews across the country in publications such as Harper's, The New Yorker, NPR's Marketplace, and others. Lulu's was mentioned in four novels, the most recent by Elizabeth Alexander in her memoir "The Light of The World."

An article by Jack Hitt upon the sale of Lulu's

Lulu's focus has always been, Community, Conversation, which connects and Creativity. She imposed a "Laptop Ban" explaining that we need internet cafes but also places of connection and conversation. It caught the eye of journalists whose articles crossed the country.

*I Banned Laptops In My Coffeehouse, an essay she wrote on Medium.com, but also appears on this site.

Lulu is an engaging storyteller. She's loving every minute of her  writing journey.  Come with her while she builds this website.

She is in the process of writing a treatment for a TV Dramedy.