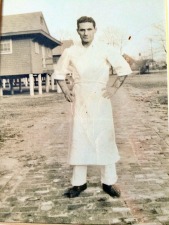 Walking in the door of Lynn’s Restaurant was like walking into an alternate Universe. The regulars sat mostly at the counter, which ran the length of the space. There were fifteen swivel stools in front, some missing patches of red vinyl, and on the left of the space were three, gray, Formica tables that appeared to be as old as the building. Willie Mac spared every expense in decorating. This is where the petty gangsters sat and plotted their latest capers, as if sitting at a table gave them privacy and legitimacy.

Jimmy Dogs usually sat on the first two stools, he weighed in at 300 lbs. so the stools vanished amid his derriere. Midgy and his boys sat together at the first table and Hollywood always sat closest to the kitchen so he could see when Willie Mac finished frying his “theft worthy” meatballs.

I walked by him one day while he was munching on a freshly stolen meatball and asked why his hair was askew, he told me, “Mr. Silvestri,” the undertaker in the neighborhood, gave him the toupee he rescued from a large dead man before they closed the casket. When he turned his head quickly, his toupee spun and landed wherever it wanted to, usually with a side-burn over his eye making Hollywood look crazy. Let me rephrase that, made him look crazier.

In the Kitchen there was a cutout in the wall so Willie Mac could keep an eye his on his brother Frankie among others, he didn’t pay Frankie because all he did was eat and hang around. One day Frankie’s coat fell off the hook spewing change, just stolen from the register, rolling all over the floor, along with two large packages of freshly baked ham wrapped in foil. He looked at my father with a "shit eating grin," Willie Mac, just rolled his eyes.

How do I know all this, Willie Mac was my father.

One particular day stands out in my memory.

I was about eight years old, sitting at my favorite place at my father’s work table helping him cut potatoes. Looking over I noticed Freddie, our neighbor and sweet soul, standing at the sink as usual but this day his whole being smelt heavily of liqueur. I could tell he was in an especially bad way because he had to keep catching himself from falling into the three-bay sink.

My father was just finishing the base to his legendary clam chowder, the one his customers teased him by saying he made it by dragging one clam on a string through the water. When he finished straining the broth he set the large pan at the end of his worktable near the sink where Freddie was washing dishes. Freddie was singing an old sailing ditty with a cigarette hanging from his mouth all while sipping a cup of coffee.

About an hour went by when Willie asked, "Freddie, where's the clam stock, I need it now it's almost 10:00 I have to put the soup on for lunch."  Freddie looked up, then side to side, in bewilderment.... Will, Willie he stammered.... I, I, I, whaaaat pan of stock?  "FREDDIE, the pan of stock I left on the end of my work counter" he said through clenched teeth, the veins in his neck beginning to bulge.  "For the soup Freddie, the soup stock, you know." Freddie looked like any minute he would be sick; his face turned a pale gray. He started backing away from my father, appearing suddenly to be absolutely sober. Did I mention that in all his years of boxing in the Navy my father never lost a match?

Willie Mac’s face was scarlet. "FREDDIE”, what happened to the stock?  Oh, Freddie, you didn't, Freddie tell me you didn't.  You threw away the soup stock didn't you,..."HOW THE HELL COULD YOU THROW AWAY A PAN OF CLAM STOCK?"  "Willie, don't get mad, I thought it was dirty water, it looked like dirty water so I dumped it down the drain, I'm sorry Willie., I, I'll go and get you more clams, I’ll go right now. I’m going, I'm going he stammered as he raced out the door of the kitchen, almost falling over his own feet.

My heart was in my mouth. My father just sprouted a head of snakes’ medusa-like. He was raging, "how am I going to finish my cooking in time for lunch, that god damned idiot, why do I keep him around?  It's my fault, it’s all my fault. He’s not a dummy I’m a dummy.  Why do I do it…all those clams… My mother hearing the ruckus called my father to the front keeping him busy. Freddie was still standing at the back door not knowing what to do next. Mom pulled him aside and handed him money to buy more clams. She said, “Freddie go quickly, I’ll call the fish market and order the Cohogs."

In what seemed like five minutes, Freddie’s face appeared at the back door checking to see where my father was. He sneaked into the kitchen with a bag of cohogs under his tee shirt with the stealth of a spy plane over North Korea. The way he was carrying the bag, those clams must have weighed as much as he did. He conspiratorially handed the bag of Cohogs to my mother, who thank god was always cool under pressure.  She took the clams, while dad was distracted in the front, washed, boiled them and presented the pot to my father with a smile.  He took the pot from her, his beautiful gray/green eyes twinkling as he gave her the sheepish grin that his children witnessed between them so many times.

Well, as I remember it, the soup was ready for lunch, my father was now calm and Freddie still alive. Now I could let out the breath I’d been holding in and Freddie, well, was still Freddie.

My father felt remorse for yelling at Freddie, who he really liked and felt sorry for... so he gave him a lunch plate fit for a king and patted his back saying, "I know you didn't mean to throw out my chowder Freddie, eat now then we’ll get back to work.

As it was in those days, Freddie went back to work, singing, with a cigarette hanging out of his mouth while sipping a cup of coffee as if nothing had ever haThis recipe is as close as I could find to Willie Mac's

"Are you suggesting that coconuts migrate?” My Bio...